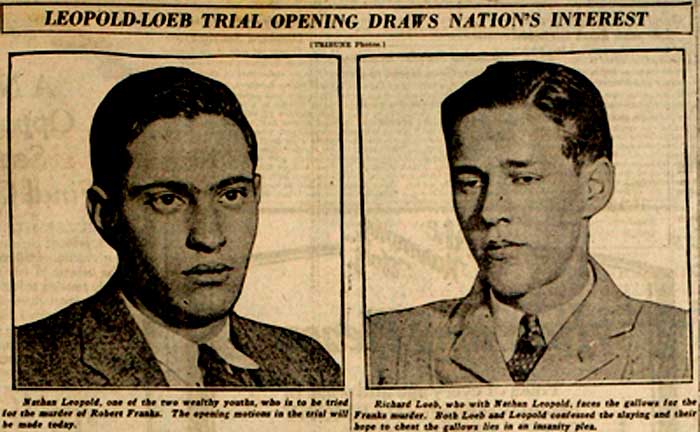 I just returned from a pleasant vacation despite Hurricane Joaquin’s best attempts to derail it! I had a wonderful time relaxing by the pool, engaging in tourist-y adventures, and of course, reading! 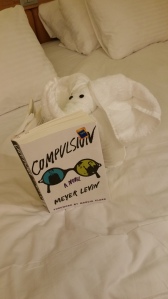 To the subject, I finished Compulsion: A Novel by Meyer Levin. Essentially the last half of the book details the arrest and trial of Judd Steiner and Artie Straus. As I mentioned in the previous post about Compulsion, you know from the beginning that Judd and Artie will be found guilty and sent to prison. The beauty of the book came in observing everything unfold. As much as Judd and Artie believed they were superior specimens and intelligent above all others, they made infantile mistakes that led to their arrest. It is quite obvious that they suffer from some mental abnormalities, however they are never clearly diagnosed.

Ultimately, Compulsion – okay, well really the actual murder and trial back in 1924 – raises a host of questions about human nature, free will, mental health in relation to crime, and responsibility. In fact, the novel itself is quite controversial. Meyer Levin has been accused of romanticizing the murderers because his approach to describing them rejects the notion that they are only one-dimensional, evil killers. Rather, he approaches them in a holistic, humane way. Yet the public is still so angered by the murder of over ninety years ago that they would rather believe the real murderers (Nathan Leopold, Jr. and Richard Loeb) are sadistic and cruel instead of considering them as people with mental health issues.

PAUSE. Everyone put your pitchforks and torches away. I’m not condoning the murder in anyway and neither was Levin. Regardless of their mental health, I do believe the murderers were responsible for their actions. However, the point that the book tries to make, and the point that I’m trying to reiterate here, is that things are rarely black-and-white. There are so many dimensions to people that we can’t paint them one color. While some people are happy to condemn a criminal, that’s not enough. We should be striving to understand people; what makes them who they are and what drives them to do the things they do. Okay, I admit it: this may be a sore spot for me since my degree is in Psychology.

That is all! This book is done. While I was away I also read Is Everyone Hanging Out Without Me? (And Other Concerns) by Mindy Kaling so be sure to check out that post!

Compulsion: A Novel by Meyer Levin has completely sucked me in. I am currently about half-way through the 456-page book. It is based on the infamous Leopold and Loeb case of 1924 in Chicago where two wealthy young men, Nathan Leopold, Jr. and Richard Loeb, murdered 14-year-old Robert Franks. 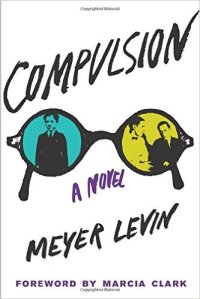 Often referred to as the crime of the century, the Leopold and Loeb case opened people’s eyes to the growing violence in Chicago. Meyer Levin was actually a budding reporter at the time and was involved in the case as it unfolded. Years later, he wrote Compulsion going back in time to relive the case. 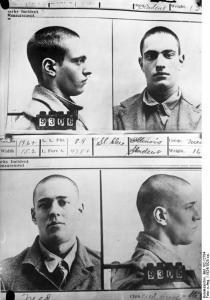 However, Compulsion isn’t merely a repetition of facts. Instead, it is a fictionalized account of the case written from different perspectives, including those of the murderers. Names have been changed and gaps have been filled. What I find particularly intriguing is that this book isn’t like other murder mysteries. Rather, you know from the start who killed Paulie Kessler (the fictionalized Robert Franks) and you know that Judd Steiner and Artie Straus will eventually be caught. Still, it’s such a journey as you follow along how they planned the murder, how they were caught, and the psychology behind it all.