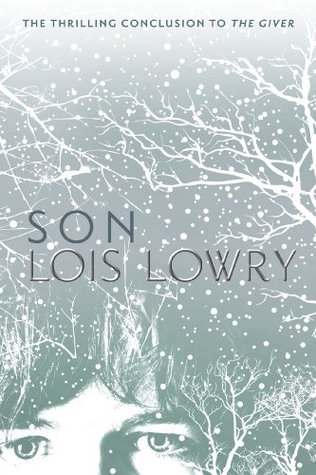 I just finished reading Son by Lois Lowry, the last of The Giver Quartet. You can read my reviews of the other novels in the series here: The Giver, Gathering Blue, and Messenger. Each book could essentially be a stand-alone novel, but the stories all intertwine as well. Let’s start with a summary of Son:

They called her Water Claire. When she washed up on their shore, no one knew that she came from a society where emotions and colors didn’t exist. That she had become a Vessel at age thirteen. That she had carried a Product at age fourteen. That it had been stolen from her body. Claire had a son. But what became of him she never knew. What was his name? Was he even alive? She was supposed to forget him, but that was impossible. Now Claire will stop at nothing to find her child, even if it means making an unimaginable sacrifice.

Let me just say, I love The Giver series…except for this book. I think it would have been much more powerful just as a trilogy. Furthermore, Son was such a departure from the rest of the series. It stuck out like a sore thumb.The first three novels were all about weighing the needs of individuals versus needs of society; so much so that the books didn’t feel like they were about Jonas, Kira, or Matty, but they were about community. Son, on the other hand, was about Claire. Yes, there was society in the background, but it was really just her story. Which isn’t bad in general (I love plenty of books about people’s journeys), but it wasn’t what I expected from a novel in this series. Additionally, this novel was twice as long as it’s companions and was extremely detail-oriented, which stood in stark contrast to the simplistic style of the rest of the series.

There were some nice moments and a few inspiring quotes. I was reminded that we can’t let fear control our life, but we have to face it head on and we have to look forwards, not dwell on the past. But that’s about all I got out of the story. 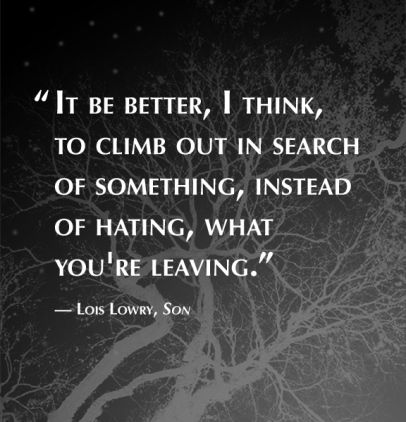 All in all, Son just felt repetitive and I didn’t gain as much from it as I had with the other novels. I didn’t hate the book, but I wish The Giver Quartet had stopped with Messenger. With that book, the ending was so appropriate for the series and the story lines had all tied up nicely. Son felt unnecessary.

Just as an update: I’m currently still listening to Paris: The Novel by Edward Rutherfurd and I’m going to read The Mortal Instruments series by Cassandra Clare next. And don’t worry, I have Drums of Autumn, the next Outlander novel by Diana Gabaldon, on my nightstand to read as well.

Until next time, bibliophiles…

2 thoughts on “Son by Lois Lowry”